It is the most misunderstood experiment of all time. Whether the misunderstanding is deliberate or whether they were truly incapable of understanding it -- I am not sure. Here's what Michelson wrote after he performed his experiment...

If now it were legitimate to conclude from the present work that the ether is at rest with regard to earth's surface, according to Lorentz there could not be a velocity potential, and his own theory also fails.

Was he incapable of understanding his own experiment? Let us find out. The experiment is fairly simple. Michelson and Morley were looking to detect the velocity of our sun in a medium (ether) that was thought to permeate the universe, and was assumed to be stationary, and that our sun and the stars moved relative to it. Also important to note is that the "medium/ether" freely penetrates through matter, even Michelson's detectors. Some wrongly assume that Michelson was looking for a "medium" -- he wasn't. He was trying to determine the velocity of our "Sun", relative to a stationary coordinate system (aka ether).

In the diagram to the right, you can see an arrow pointing upwards, indicating our sun's motion with respect to the stationary ether. It therefore follows that for someone on the earth, 'aether' would appear to be moving in the downward direction, as indicated by the several dotted arrows, pointing downwards.

With this in mind, please view the animation below, which starts with a demonstration of "aberration of light" and then extends this to the transverse arm of the Michelson Morley experiment, where the aberration theory applies.

As you can see, the aim of the experiment was to split a beam of light into two. Then send them in two different directions as shown in the animation.


They reasoned that the transit-times of one of the beams, would be altered due to the absolute motion of the SUN (by extension their own apparatus) causing a time-delay that a detector will detect. As you can see in the animation, the red dot appears to be lagging, with respect to the blue one. Michelson-Morley were looking for this delay in form of an interference fringe shift.

It is important to note that Michelson assumed that the velocity of light is c relative to a stationary medium (aether). Therefore, the red dot travels a longer distance than the length of the arm [D+d1] while going and a shorter distance [D−d2] than the length of the arm while returning. Here d1 is larger than d2 by a very small magnitude, which can be ignored in any terrestrial apparatus as has been pointed by Maxwell, Voigt and Ritz.

The vertical beam (blue dot) aberrates and travels only a distance of 2D at c. Aberration of light is a deviation of light from an expected path, and this deviation can be represented in terms of "aberration angle". And this deviation is not a real path. The blue dot goes up at 90 degrees and returns at 90 degrees, and it is the mirrors/telescope that move to the right, and therefore, the red ball and the blue ball do not meet at the same point (on the splitter) when they return. This was noted by Michelson in his 1887 paper, as a second order effect. Here's how he said it:


It may be remarked that the rays ba1 and ca1, do not now meet exactly in the same point a1, though the difference is of the second order; -- Michelson, 1887 paper.

Therefore, both the beams will travel at c. The vertical beam, produces an aberration angle inside the apparatus, that requires the tilting of the telescope. The horizontal beam produces an effect known as Light-time correction. Here's what Michelson wrote about aberration in the apparatus:

The ray sa is reflected along ab, fig. 2; the angle bab1 being equal to the aberration = a (20.5 arcseconds), is returned along ba1, (aba1 = 2a), and goes to the focus of the telescope, whose direction is unaltered.

These angles 'bab1' = a, aba1 = 2a, ca1e = 90 − a were of second order (whose maximum value is 20.5 arcseconds which corresponds to the motion of our Earth around the sun, which is 30 km/sc). But since Michelson didn't know which direction the Sun was moving relative to a stationary ether which also was one of the complaints of Maxwell, he declared that a terrestrial apparatus could not detect the velocity of our Sun relative to a stationary ether. This effect that Michelson was trying to detect (in the form of an interference fringe shift) is known as, secular aberration. One can detect secular aberration, only if one knew the direction in which the sun is moving relative to the stationary coordinate system, known as aether. Which means the theoretically predicted values in the Michelson paper, were useless, unless you point one of the arms exactly in the direction of the motion of our sun. Pointing it anywhere else, would mean your apparatus would only record a fraction of the predicted value, especially since the apparatus was rotated continuously. Michelson admitted that it was "hopeless" to determine the velocity of our sun via a terrestrial apparatus, mirroring the researches of Maxwell, Voigt and Ritz.

Naturally, Michelson in his 1887 paper, proposed using Jupiter moons for the detection of absolute motion of our solar system with respect to ether. To this day, those experiments, even though they are extremely simple, have not been performed by later astronomers.


The aberration angles mentioned in the original MME paper taking the Earth's velocity around the Sun were given as follows, by Michelson: 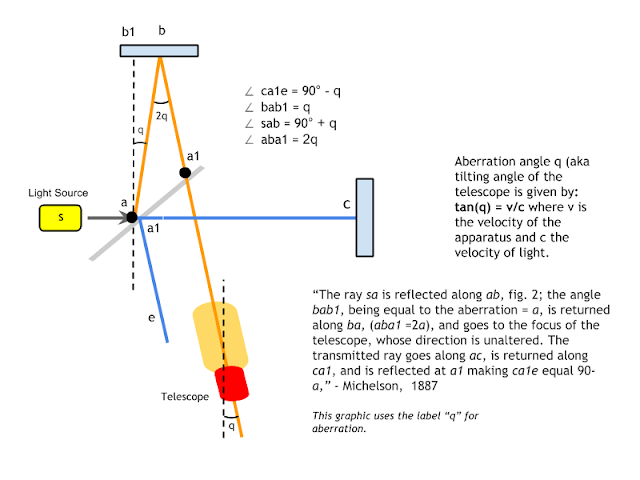 The value of q = 20.5 arcseconds taking the Earth's velocity around the Sun, that is 30 km/sec. An arcsecond is approximately the angle subtended by a U.S. dime coin (18mm) at a distance of 4 kilometres (about 2.5 mi).

Note that Michelson should have shown aberration paths in dotted lines, but he didn't. He also should have shown the tilting of the telescope in his diagram given by the formula, tan(90−a) = v/c. And he didn't. Also, most readers confuse the above Michelson diagram to a Relativity Diagram, and it is not a Relativity diagram because the "aberration angles" that Michelson referred to and observed were from "inside" the apparatus. Faster the apparatus moves, greater the "aberration angle" and therefore greater the tilting of the telescope. Physicists continue to misrepresent Michelson's 1887 and 1881 paper. Whether this is (or was) deliberate... I am not sure. But they are misrepresenting Michelson's work. For a detailed look at Aberration Theory and the Michelson Morley experiment, please go here and scroll to Section 3.

Here's a quote from Michelson's 1887 paper where he made the following conclusionary remarks about his experiment.

It is obvious from what has gone before that it would be hopeless to attempt to solve the question of the motion of the solar system by observations of optical phenomena at the surface of the earth. - Michelson, 1887.

Michelson in the above quote is basically agreeing with Maxwell, Voigt and Ritz, that the velocity of our Sun could not be detected via terrestrial experiments. Something that Maxwell already knew years ago. But Michelson gave it a try, anyway. The silver lining is he proved, Lorentz' theory wrong as has been pointed out by the Michelson quote at the beginning of this article.