Current theories of physics claim that 'Light' is both a wave and a particle and that, there isn't anything paradoxical about such a claim, since light does not exist as a wave and a particle at the same time. It exists as a wave when you perform a wave experiment and changes into a particle when you perform a particle experiment. This is the rationale for what is known as The Wave-particle duality in Quantum Mechanics, (which also makes extensive use of an entity known as Angular Momentum).

However, the paradoxical nature of the current theories of light can be gotten rid of if a particle theory of light, can explain a phenomenon known as Interference.

The picture to the right, is of an interference pattern on a thin film (soap bubble).

In this post, I propose a mechanism to explain the patterns that we see on thin films, via a particle theory of light.

The mechanism will first be explained via two rigid meshes and then extended to the soap bubble whose picture we see above. Let us first look at a picture with two meshes. For this I googled, "mesh chair" and found this (see to the right).

The diagram below shows an illustration of how we see interference patterns when there are two meshes between an observer and light. 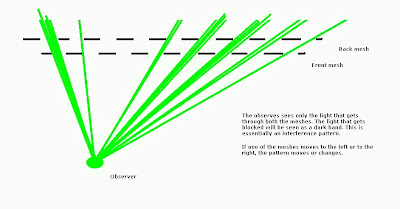 In case the reader is wondering why there are colors associated with the interference pattern in the soap bubble, one needs to look at the Goethe's Theory of Color, for a satisfying answer. I will discuss this theory in my next post, and explain how Goethe's theory fits in with my particle theory of light.